How to find us

Mineral springs were known for their healing benefits since ancient times. Under the Romans, Emperor Neuron systematically took baths to improve his health. The ancient Greeks had the idea of connecting the Aegean and the Ionian seas through a canal. The Roman, philhellene Emperor Nero was one of the first to attempt this conjunction, albeit with limited results. The project was finally materialized at the end of the 19th and the beginning of the 20th century. 6.5 km from the Corintian canal there is the seaside town of Loutraki.

Renowned for its mineral springs since antiquity, Loutraki became a cosmopolitan Spa resort in the 1920’s. Nowadays it boasts one of Europe’s largest Casino, a modern SPA Centre, as well as abundant life in its numerous restaurants, bars, and cafes. This lively seaside resort furthermore flaunts a stunning natural scenery with crystal clear waters and pine trees cascading down to sea level; as well as a wealth of attractions including ancient and Byzantine monuments, such as the monastery of St. Potapius at 600 meters above sea level. This is the privileged locale of the Green Villa Loutraki.

A gorgeous home away from home, tastefully designed and impeccably appointed with the latest worldly comforts, the Green Villa Loutraki blends privacy and seclusion with top-class services, offering the best of both worlds.

Addressing travelers in the know, this classically elegant Villa in Loutraki, is an ideal hideout for all sorts of adventures and escapades nearby: From an immersive, therapeutic and detox experience at the Loutraki Spa center, or an adrenaline-raising adventure at the Casino, swimming or playing in cerulean waters, doing water sports in Lake Hereon, or exploring antique monasteries and ancient remnants, choices abound. Go about as your mood strikes you, and expect no less than deliciously fun and action-packed days and nights!

Loutraki (Greek: Λουτράκι) is a seaside resort on the Gulf of Corinth, in Corinthia, Greece. It is located 8 kilometers northeast of Corinth. The town is well known for its natural springs and its therapeutic spas.

By Air: The Athens International Airport “Eleftherios Venizelos” is 112 km from Loutraki, just an hour away.

By Train: Reach Loutraki via the Athens Suburban Railway with frequent routes throughout the day guarantee a rapid transit to the city and the airport. 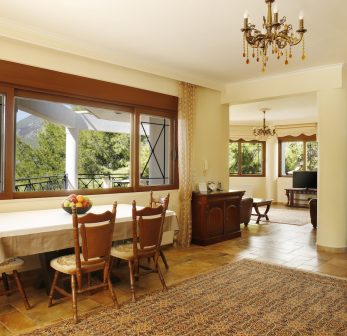 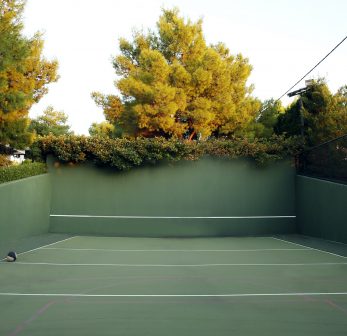 Living is good at the Green Villa Loutraki, with its sizeable pool and sports grounds, its expansive, fragrant gardens, and alfresco lounges.
READ MORE 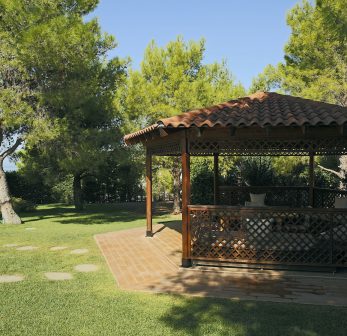 GREEN PARADISE ON THE HILL

Offering captivating views and utmost privacy from its vantage position on top of a verdant hill, the Green Villa is within a short distance from the Spa resort of Loutraki and a wealth of other attractions
READ MORE